Bevel Tech Group Inc has a long history of working with companies in the deep-water oil exploration business. When we first started counterboring deep water pipe ends for these companies many years ago, everything was new to both the oil companies and Bevel Tech Group Inc. We started counterboring pipe ends with manually operated clamshells and performed all measurements with calipers. As deep-water depths increased, tolerance specifications for the piping, especially steel catenary riser piping grew much tighter. Bevel Tech Group Inc was the leader in performing this kind of work, and we essentially became the “experts” in this technology. We have counterbored thousands of pipe ends that now are in production in the Gulf of Mexico.

As business in this area grew, and tolerances because so much more stringent, we invested time and money to develop several of our own proprietary CNC machines that easily exceeded the limits required by our customers. Our proprietary CNC machines would produce 4 times the amount of production than the manually operated machines. Bevel Tech Group Inc wrote counterboring procedures and specifications that were adopted by the major oil companies and are still used today.

Another need of the major oil companies was to have 3rd party verification measurement processes of all pipe ends. This was especially important after the incident of the Deep Water Horizon disaster. That’s when PEMS became another valuable service for our clients. 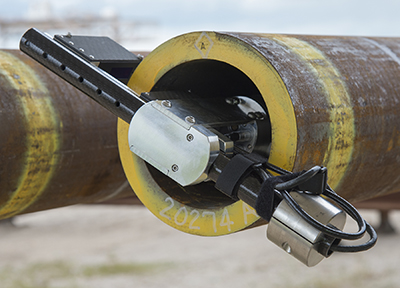 PEMS is a pipe end laser measurement system (laser) developed by Bevel Tech Group Inc as an alternative to the traditional caliper measurements for pipe ends. The PEMS laser measurement system can be used prior to counterboring to help companies determine the optimum diameter bore of the deep water pipe. And of course, it can be used to validate the target specifications of all pipe ends after counterboring is completed. PEMS is capable of providing over 2000 wall thickness measurements per pipe end and delivers the data in a friendly Excel spreadsheet.

Bio:
Twenty years of experience in the oil and gas industry. Upon graduating high school in 1996, in order to pay for further education, I began my career at the age of 17 as a welder helper at Acadian Contractors Inc. Attended Gulf Area Technical College in Abbeville Louisiana and graduated in 1998 with a degree in Drafting & Design Technology. Soon after I secured a job at Corne Lemaire Group (Architecture firm) in Lafayette Louisiana as a draftsman. However my career in the architecture field was short lived. After 18 months I realized that I had a strong passion for fieldwork and therefore the oil and gas sector was a better personal career path. In 2001 I managed a steel distributor company named Sam Guarino & Co in Abbeville, La. In 2003 I was hired by SPT Energy Group located in Abbeville Louisiana. I worked there as both Operations Manager and End Dimension Manager for 12 years.
Married in July of 2002 to Mandy Meaux, and blessed in 2009 with a set of healthy twins, Benjamin and Emmalyn.